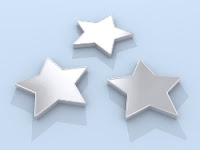 This check-in I get some snazzy, silver stars! I didn't get much done on my outline, but I did talk about it. It's part of my process...I talk my story line out with trusted friends and family until the story is very clear in my mind. I finally feel I'm in that place. I am surprised by how the romantic story line is already taking a a bit of a step back. But I don't think it's a bad thing.

I also received some AMAZING news!!!! I am officially part of the cloud of Mark Williams International Direct Publishing. It's a new company run by authors, for authors. The idea is that Mark Williams and his core group of authors have done very well in the UK markets. By authorizing them for temporary distribution rights in the UK, France, and Germany markets for a 80-20 split in my favor, it gives my book more of a chance in those markets. For example, Mark can list CANCELLED with Waterstone's, the UK equivalent of BN (and I actually looked into listing there last month until I realized I could not). There are many other benefits as well in pooling with a group of such fabulous authors of Tonya Kappes (who has a NEW RELEASE today, Happy New Life), Cheryl Shireman, and Sibel Hodge just to name a few in the cloud with me! Economies of scale is a very real thing, and I'm learning we all do better when we put our books together, instead of acting like we're all competing for one reader.

Now... the FUN! This past weekend remember how I took the long weekend off to spend it with my kids? Well here's some photos from out Apple Picking Adventure!

I feel so refreshed and recharged! I also did not check my sales figures to the point of neuroses these last few days, so again making progress there.

Now, about STRIKING WHILE IT'S HOT. My writing tip for this week is about making things happen right away. Got time to write? Take it. Receive an invitation to guest blog? Write it. By immediately seizing the opportunities before you as soon as they become available, a couple of amazing things happen:


So I plan to be on fire for most of the rest of the week. I'm taking the weekend off again because my husband is finally joining us in Connecticut after we've spent more than a month apart. Hmm, maybe this whole work my butt off, take the weekend off is a good idea!

A robotics engineer asks his business partner to marry him, but a previous one-night stand is having his baby. CANCELLED is available on Amazon, Barnes and Noble, and Smashwords.  WIP: PAST DUE A nurse, crippled by debt, takes a part-time job in medical investigation only to find the man she's dating is a fraud!  (status: outlining)


PLEASE VISIT AND LEAVE SOME COMMENT LOVE FOR MY FELLOW #ROW80 FRIENDS!