How Apple Changed My Life 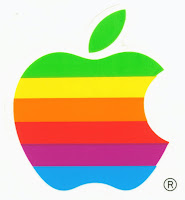 And my 2-year-old just pointed to the picture on the right and said "APPLE!" I hope Mr. Jobs heard that, wherever he is.

I am not usually sad when celebrities or other public figures die. Not like this. I am truly saddened that we as a world, lost Steve Jobs at so young an age. I am not an Apple enthusiast or really even a big fan of the products, but I've always been thankful for the innovation.

I'm part of the generation, maybe one of the youngest members, that remembers the day my family bought a computer. I was in 4th grade. But it wasn't my first exposure. My school had a cart in every classroom with a Macintosh II. Once a week our computer resource teacher would come in and I would furiously finish my work to be one of the first students done, so I could sit with Mrs. Burke. I didn't realize I remembered her name until just now. That's how strong the memory is. We used a piece of software that let us make a simple picture up to and add our "story" to the bottom. I was allowed to stay in from recess to write my stories because it was more fun for me than going outside to play.

Also when I was in 3rd grade, my Uncle Joe lived with us shortly and he had a Macintosh Plus. I used Paint Shop to make a poster for my room with ants crawling around the edges. In middle school, we used Macintosh Classics in computer lab to learn desktop publishing. Claris Works. It was a coral colored icon we clicked on and my first exposure to the miraculous word of desktop publishing. Not long after this, my family upgraded to Windows 95, with a brand new PC (our original one had Windows 3.1 on it).

I'm not like many other writers who have cutesy stories about writing journals, writing stories by hand etc. I typed my stories. Always. From my mother's Brother Typewriter to Notepad, then to MS Works. My summers were spent drooling over all of the information on our Grolier Encyclopedia CD and "assigning" myself reports. I wrote a two page report on how coins were made. I remember using the EARLY versions of the Internet, like Produgy and eventually AOL. My family didn't always have money, so my sisters and I would scour stores and neighbors for the "FREE" AOL disks to get a month for free. This was before a company could really tell if you uninstalled the software and reinstalled it, so you could keep getting months free. I've used the handle Ewizabef online since 1994.

I would never have been as proficient on a PC without my early years of exposure to Apple computers. Like I said, I was never an Apple enthusiast. When I left for college in 2000, I bought an old Mac PowerPC 7200 for $50 from a neighbor. It couldn't even go online. But I could type up my papers, and save them on a disk and print them out on a little printer. It's all I really needed. All of the cool kids had an iMac G3 or G4. And I was the resident "technician" everyone called on the 4th floor of Santoro Hall to fix a computer because "Liz knows about computers..." Did I mention way back when, I once printed the entire HELP file for DOS because I wanted to learn all of the commands? Oh my Dad was so mad I wasted all of the ink... LOL

I don't own an iPod, I owned a MacBook for a year of hell because it was a lemon (bought Christmas 2009). I run Linux, another Unix based operating system and close cousin. And I don't really want an iPad. But the fact that those products exist still impact my life today. Without the success of iTunes, I wouldn't have the other music store options that I use. Without the success of the iPhone, I wouldn't have a touch screen cell phone (that's not an iPhone). Apple has always been willing to be out there, in the front, and not always commercially successful. But just because I don't buy Apple products, doesn't mean I don't appreciate the company's forward-thinking and the influence it has on consumer electronics across the board. And most of that is thanks to Steve Jobs, and I'm very sad he's gone.

But I will think about his genius and guts every time I put in a Pixar film for my children. Every time I hear iPod used to refer to any MP3 player. Every time I use a touch screen instead of another input device. And years and years and years from now, I will be proud to explain the history behind the technology my grandchildren use and tell them about this great innovator who came up with technology to improve our lives even before we knew they needed improving.

A robotics engineer asks his business partner to marry him, but a previous one-night stand is having his baby. CANCELLED is available on Amazon, Barnes and Noble, and Smashwords.  WIP: PAST DUE A nurse, crippled by debt, takes a part-time job in medical investigation only to find the man she's dating is a fraud!  (status: outlining)
Posted by Unknown at 9:10 AM