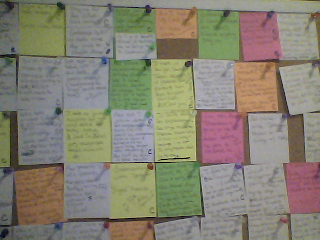 It's pretty. I love the splashes of neon note cards. Pink represents my three major disasters. Orange are "point of no return" scenes, so I know this is a big turning point for my characters. For example: the night two of my main characters hook up in the hotel room above the benefit dinner they're attending (just found out tonight they steal 2 bottles of champagne from the event O.o.O it's fantastic when the characters whisper in your ears as you're planning stuff out). Yellow and green represent two separate subplots that fuel the main plot. The yellow is the sub plot that ultimately helps Johnathan make the decision about what kind of father he's going to be to his unborn child, and the green leads him to the lifestyle he ends up in.

I love having the road map made out of office supplies. Something about using office supplies like a bulletin board, multicolored push pins and note cards. I tried using a spreadsheet like it was suggested in Writing Fiction for Dummies, but it felt too cold. Writing each notecard out made me feel like I was touching my story, giving care to each little scene, making sure it fit in the right spot. There were a few casualties. I cut an extra romantic weekend (I think one per novel is sufficient), and some things were demoted to honorable mentions in more important scenes.

I didn't forget about my publisher work today. I'm lurking on a number of indie author blogs and getting a feel for the community. I have solved the dilemma of "genre" finally. This novel is a Romance --> Contemporary. Since my stepson told me last week that I had make sure my main character Johnathan have someone he's with at the end of the book. When I asked him why, he said "Because the baby needs a Mommy." He's so cute! So the ending changed quite a bit, and now it's fairly happy, I don't have to worry about failing the formula. Instead, I just tweak it a bit in that my main character is male! and it's a toss up until the end which female lead he ends up with! Even then, everything isn't perfectly, sappily resolved and I don't think it really can be given the storyline.

I'm about 98% sure my storyline is in place. I give myself 2% chance of something happening as I'm writing it out. I know I should write a synopsis now, but instead I'm going to charge into writing copy. I already have rather large chunks completed in various parts of the story (mainly pink and orange cards) but they need editing and tailoring to the rest of the story.

In performing the checks listed for "Is your storyline solid?" the results made me feel more confident in my ability to design a storyline. For every single main character (I have 3 major characters, 4 mid-level characters, and 3 or 4 pop ins) the major and mid-level, there is a clear story arc with a dilemma goal and story question. I didn't even plan this, it just happened as the story developed. For example, there is a clear point when Johnathan decides to propose, when Alex resolves her freak out over the baby by trying to take control of the situation, the point where Anna (the stepmother of Johnathan) realizes she needs to own up to the past about Johnathan's father and he tells her he's too busy right now with his own drama, it doesn't matter what happened twenty years ago (oh, but it does.....).

So tomorrow? Character dossiers (which I'm NOT particularly excited about...we'll see how that goes). I think I'm going to work on a scene or two tonight so I can throw it in the "raw material EDIT" folder.


"Imperfect Timing" arriving Fall 2011. Johnathan Michaels, a robotics engineer, jeopardizes his engagement with his business partner when a previous one-night stand surfaces, carrying his child.
Posted by Unknown at 9:25 PM