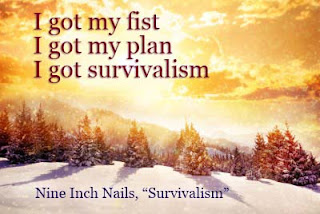 This morning I woke up, I made my bed and did the dishes. This sounds trivial but it's a part of my plan of "oh grow up, Elizabeth." I will be 31 years old at the end of March and part of me still clings to an idea prevalent in my generation regarding "downtime." It goes like this.....we deserve downtime. But why? My husband's grandparents don't EVER stake a claim for leisure time, and they're actually "retired!" My parents are more of a cross between that generation and mine, with no sense of balance at all, it's full throttle work or full throttle play.

My generation benefits from the most advanced technology to date to ramp up production yet what are we producing? Not a whole lot. Sure, there are visionaries my age that are multi-billionaires from their good ideas, but as whole, most people my age aren't really willing to work hard. We're GREAT at hardly working though! :)

If I don't step up my game I'm going to blink and my life will be just a series of doing the bare minimum until I can "relax" again. That's not a legacy to leave behind! Hence Project Everest: 750,000+ words by December 31, 2013.

Where Do I Stand?

This morning I tested myself on just plain old WRITE for 5 minutes and came up with this, an additional 140 words for His Parson's Wife:

Tea was served at Netherfield Park promptly at four in the afternoon and the mistress wouldn't have it any other way. Caroline Bingley walked around the parlor to check once more that every detail was perfection. Groomed for society's highest demands at an exclusive finishing school in London, where most young ladies with the stench of trade to their money would shrivel up and know their place after three years of the Ton daughters shunning them, Caroline Bingley was a different breed altogether. As the months passed by that the peerage daughters demonstrated Caroline would never be good enough, Caroline hardened her heart to making the most advantageous match possible: Fitzwilliam Darcy.

The inconvenience facing her now was waiting out his wife's death and talking her brother into taking her to Rosings to help console the man.

They're rough words, but words all the same. This means a potential rate of 1680 words per hour. When I originally calculating my "work hours" I planned 750 words per hour. I'm going to do a few more tests, including slower writing to see where I land, but I'm fairly confident I'm more in the 1,200 words per hour range, a savings in time required for the project by 40%.

I Didn't Want To

I didn't WANT to write those words, either. I forced myself to get started. Day One and already I'm thinking "Ugh, what's the point?" But it's all about survivalism and while I know the inspiration song is more about our complete disregard for the Earth, I like the pacing of the song because for me writing is like that. The verses are plodding, a march beat, a slogging through it if you will. But then, I get times where I'm like the chorus, an elated punch through the fake obstacles my mind builds up that IS pure propaganda.

I got my fist
I got my plan
I got survivalism

Now your turn. Get some! Because I'm going to go get mine right now and bang out a few thousand words, then take a break and do my HTML work for the day.

UPDATE: 12:35 PM
Just did #wordmongering on Twitter, where you write for 30 minutes. I was still interrupted twice by my daughter annnd 1,052 words were still written. Very encouraging. Just got to keep on keeping on. Now time for HTML work, will write more later tonight.
Posted by Unknown at 11:20 AM