Writing Business: Getting Back on Track for 2012 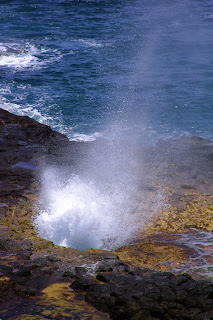 I use many water references on this blog, I'm realizing. Then again,  I've lived nearly my entire life on the East Coast next to a port. My father was in the Navy and my husband is also in the middle of a naval career. But to be clear, I love to be on the water, or near the water, not so big on IN the water (I can't coordinate my breathing well enough to swim underwater).

That aside, this picture really captures how I'm feeling right now about my writing career. There's two sides to a writing career I feel - the constant, disciplined side represented by the continual waves, and the exciting, breath-taking spurts and bursts of wonderfulness.

The bursts of power and recognition come when you get that 5-star review, or wake up and see you sold 5 books while you were sleeping, instead of just one. They are thrilling, but also have a dark side. They can raise unreasonable expectations, create deep lows that make it difficult to feel motivated to work, and really make you crazy as you try to sustain the effort you perceived made it happen.

For the last two months, I was mesmerized by the spurts and bursts in my sales figures. You see, I've improved my sales every single month since I released CANCELLED in September. But lost track of the discipline that allowed the book to be written. Since 9/13/2011, I've written maybe, maybe 1,000 words on any of my new projects. But I've written thousands and thousands of words for blog posts, interviews, tweets, and other marketing endeavors. Next month, I am running a virtual book signing tour (details to be released soon), and I think that will be the end of my concentrated focus for marketing CANCELLED. After January, and four months of living in the sun, it will be time to let my other projects take the limelight.

My mother-in-law really helped me realize just how lost I was... I mentioned to her how I had sold over 100 copies of CANCELLED and this is what she said: "That's great, but we're not proud of you for how many books you sell. We're proud of you that you wrote a book." It took a few days of these words swirling in my brain for it to really dawn on me. Even I'm not really that impressed with other people's sales numbers. I'm not. I'm more impressed with their portfolio of writing. And no one writes novels in a sudden burst (at least not that I know about), they write them with the other side of water; the constant discipline represented by the waves.

I have to use two strategies to keep my wayward focus in line.

I wrote CANCELLED in 30 minute increments with an 18-month-old under foot, after I had my complete outline drafted. She's now 2.5 years old. I work best under some type of pressure. Nothing insane, but I don't do very well when I don't have a jam packed schedule. When I only had 30 minutes to write, I used every one of them. Now that I have larger blocks, I find myself more and more distracted because I'm the Queen of "I have plenty of time to do this...later."

My husband and I have finally come to a compromise about me going back to work. I was initially hoping that we could get through this lean year of greater expenses due to the move and still owning a home in SC, but it's not a good idea to live so precariously, financially. Instead, I will be looking for a job in January and putting my youngest into daycare for the first time. This was very tough, but hopefully it will only be for a year or so. I'm also hopeful it will give me more time to write. Confused? if I have less time to write, it will become more precious. I won't waste the hours that I have, instead I will be looking for a way to unwind, which is what writing always is for me.

The goal is for me to only need to work for one year, and to hopefully have enough content out available for sale that the small royalty checks will let us enjoy a little extra income, but not rely on my continuing to work. My hope is that my daughter will be in daycare for about a year, stay home with me for a summer, then start preschool one or two days a week when she's 4. (My friend's son went ballistic at that age when she had to pull him back out of daycare at 3.5 to stay home, so it will be  happy medium I think. I WANT to enjoy as much time with my daughter as I can).

I love preparation. Preparation is probably my favorite part of ANY project. In light of my going back to work in three weeks, I need to get done what DOES take me enormous amounts of time to do. I will have weekends, and evenings, but there are a few projects on my plate that would benefit from longer hours of attention.


I know this is a very personal blog post, but I've been rereading some of my earlier blog posts from last year, back before I had any followers. It's been very inspiring to see just how far I've come as a writer and I'm looking forward to reaching new destinations, not necessarily heights, in the New Year.

How about you? How is YOUR writing business going? Are you making adjustments for 2012? Share them below!

A robotics engineer asks his business partner to marry him, but a previous one-night stand is having his baby. CANCELLED is available on Amazon, Barnes and Noble, and Smashwords.  WIP: SERVED Two never married parents fight over their toddler's upbringing and moving on with their lives, without each other;(status: outlining)
Posted by Unknown at 8:45 AM

Our doubts are traitors,
And make us lose the good we oft might win
By fearing to attempt.